Soldiers shot my brother! How to produce instant ancestors.

Relax, he’s not my brother. Someone at a Civil War re-enactment cheerfully asked me, “Can you photograph my brother being executed by a firing squad?” So I did.
I would never allow my own brother to be shot by a firing squad, he owes me money.

So what’s this lesson all about? This lesson is about making vintage looking photos for make-believe albums, advertisements or other uses. It’s great fun and if you like doing it, you can develop it into a side business.

I was inspired to create ‘old’ photos by my great uncle, a commercial photographer and camera store owner in San Francisco from 1906 through 1951. Shown in figure 1 around 1948. His career began at age 13 when he made postcards of his photos of the Great San Francisco Earthquake of 1906. He opened his first camera store in 1917 only four blocks from the devastated location shown in the postcard. Uncle Herbert’s legacy of old photos, over 3,000 handmade prints, influenced me to become a commercial photographer.

I always wanted to leave a legacy of photos behind, as he had done. I certainly have tens of thousands of photos, but they look too modern. They’re not as interesting as those shots Uncle Herbert took right after the earthquake, or while camping with Ansel Adams. (no joke) I decided to create my own family history and populate it with extraordinary characters. On occasion I’ve done new ‘antique’ photos for clients too. It’s a fun little side business.

Now Let’s get right down to the business of taking photos and making them look old, because that’s where the fun begins. The basic approach is simple: Use the same lighting techniques and posing as they did in the period you wish to portray. Figure 3

Convert the image from color to monochrome in post production. (Sepia works well.) In the photo of the austere soldier with the rifle, I used a Photoshop action called BW Rosie from the Kevin Kubota ‘Vintage Delish’ collection. It was a quick one-step process.

In the example in figure 4, I used the ‘antique sepia’ setting in Adobe LightRoom, in addition to lightening the corners of the image. For most projects, these simple conversions are sufficient.
Figure 4

The lighting for the shots were accomplished by turning the subject away from the sun and using a 42” MultiDisc® to bounce light back into the shadows. (Silver side used) Reflectors were among the first photographic lighting tools, so you’ll be on solid authentic ground with this technique. Figure 5

Using a reflector has the additional benefit of reducing contrast in situations that are far beyond the range of your camera sensor. Using the white surface provides soft fill light for two subjects in bright sun without any tell-tale shadows or reflections. Figure 6.

These location scenes could be controlled with flash, but that can make highlights that ruin the feeling required for photos from a bygone era. In the comparison below in figures 7 and 8, you can see the benefit of using the white side of a 42” MultiDisc®. This is a great technique for improving any harsh sunlit photo, not just vintage shots.
Figure 7

Another approach to controlling sunlight is to place a diffuser above the subject to soften the harsh direct light. In the following photos Lauren, my wife, is holding a 39”x39” LitePanel with the translucent fabric above cowboy Randy.

The sunlight on his mustache and chin is ruining the shot, but the LitePanel fixes that. The improvement in the lighting is quickly achieved and very dramatic. Now that you’ve seen how simple the lighting can be, let’s take the next step to make your photos look authentic. Figure 9. 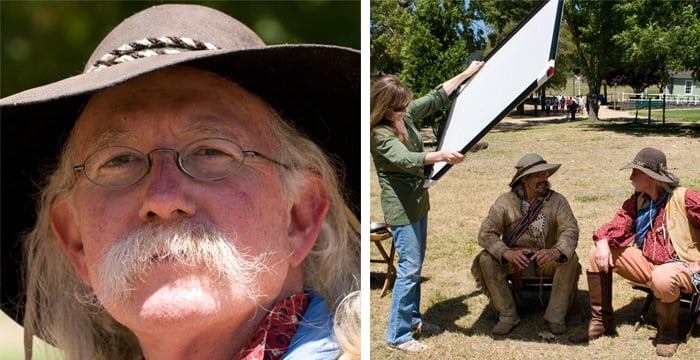 The final photo shown below looks like it was taken 150 years ago. Two words that describe the process are ‘degraded’ and ‘distressed’. In this case the image in figure 10 was merged with a marble floor texture and blurred using the Gaussian and Motion blur filters in Photoshop. Figure 10 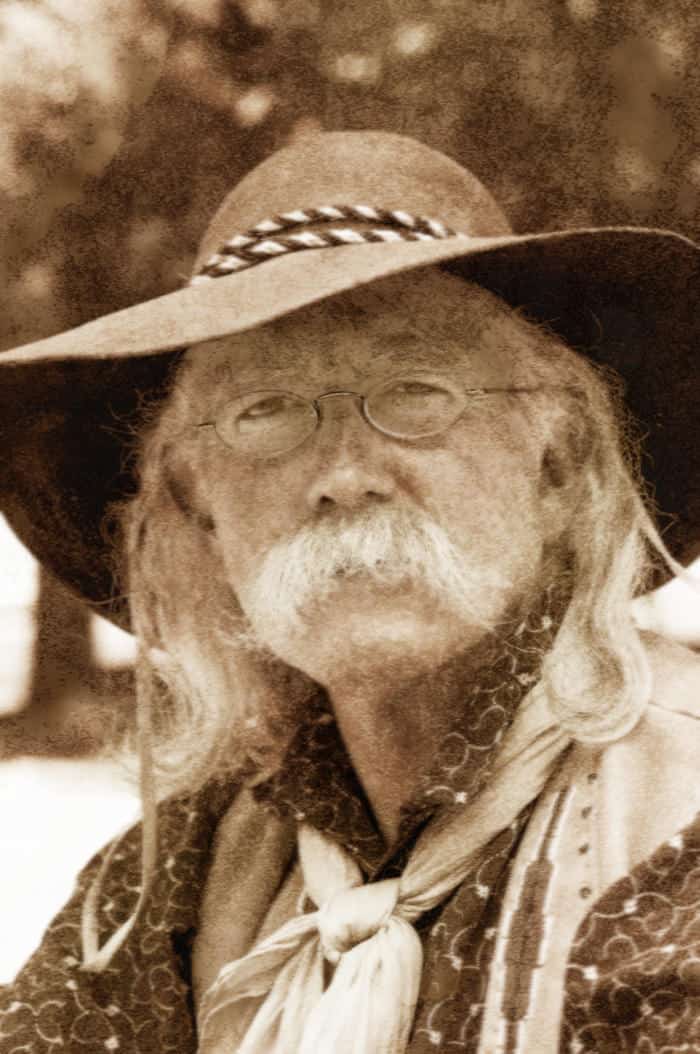 The actual layers as they appear in the Photoshop menu are shown in figure 11.

This will be familiar to Photoshop users, but a larger version of the components of the final photo are shown individually in figure 12. The first layer on the left is the original sharp image after conversion to sepia. The next layer is the same image after using the Motion Blur tool in Photoshop. The third layer is a photo of a marble floor, which is one of my favorites for ‘aging’ a photo.

I didn’t want too much of this effect, so I reduce the transparency of the marble layer to about 15%. The last layer on the right is a hybrid layer that was created from all the previous layers. There are many approaches to this technique and experimenting will quickly yield interesting results. More about this later in the lesson.

If your goal is to make your subjects look historically accurate, you’ll need to eliminate every bit of non-period subject matter from your composition. You could rent costumes, but that’s expensive. I recommend attending a historical revival or re-enactment to get properly attired subjects.

In my area, the Santa Cruz Mountains of California, there’s a Mountain Man Rendezvous in early August and a Civil War Re-enactment in late May. Each event is a buffet of willing subjects, like the nice lady in figure 13. All of the people in these photos have carefully researched their outfits and made sure that the fabrics, patterns, eyeglasses, hairstyles and jewelry all match the period. 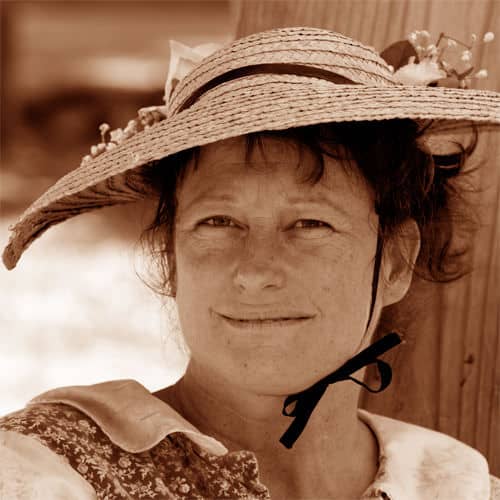 The photo in figure in 13 is challenging situation because she’s in the shade of a tree and her face is also darkened by the brim of her hat. By placing a 39” x 39” LitePanel with white fabric in the sun to light produce a soft light source, the contrast ratio and quality of light produces a natural looking result. Set up shown in figure 14. 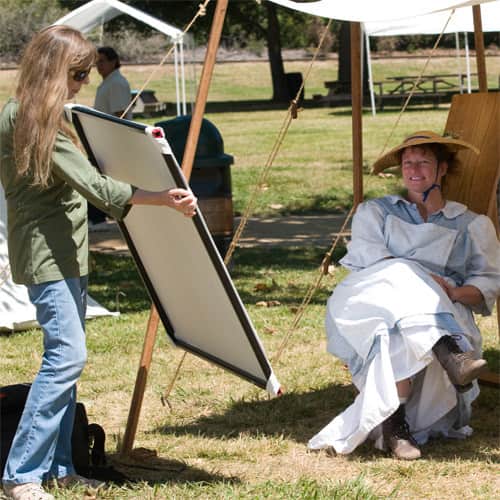 Even though the photo of the lady with the hat is sepia toned, it’s still quite modern looking compared to the earlier altered shots in this lesson. More alterations would be needed to complete the ‘aging’ process. There are no steadfast rules to producing vintage photos, so don’t feel obligated to alter each one.

By 1850 photography had been commercialized and was spreading throughout the known world. The process, however, was not easy. Glass or metal plates were coated with photo-sensitive emulsion and used while still wet. What a hassle it must have been for location photographers like Matthew Brady, who followed Abraham Lincoln along the front during the Civil War. Figure 15. Details at: http://www.npg.si.edu/exh/brady/animate/photitle.html 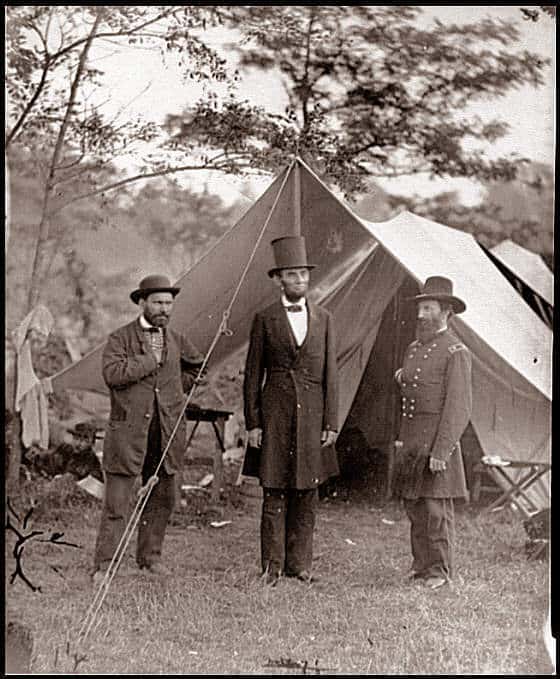 Because many of the old photos from the 1860s show a lot of artifacts, such as fingerprints, scratches, mold, peeling and fading, it’s very effective to make the prints look as though they are ‘tarnished’. This tarnished effect occurs when the metallic silver of the print gets contaminated by sulfur and other pollutants in the air. For this realistic effect, I use a photo of cracked and dirty concrete as a layer. The texture shows up in the darkest areas, exactly like it would on a real handmade silver print from 1900. Figure 16.

By the way, smiling faces didn’t appear in pictures until the photo process became less expensive and capable of shorter exposures. The combination of inexpensive roll film and fast shutter speeds made spontaneous expressions possible.
Figure 16. 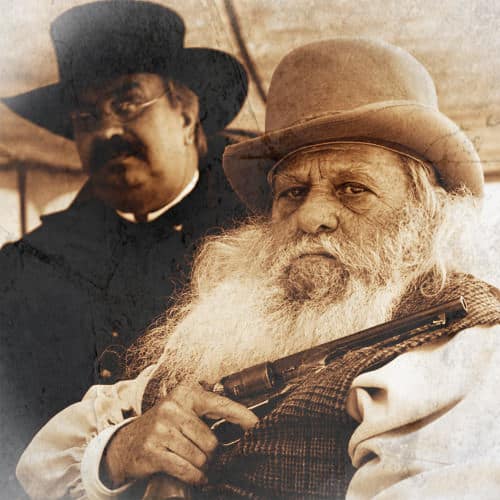 The original image of the two gunfighters and the photo of the cracked concrete are shown in figure 17 along with a screen image of the layers as they are built in Photoshop.

Here are some tips for people that aren’t familiar with using layers in Photoshop. These points are simplified principles and only serve to explain what can be done with Photoshop, but not a detailed roadmap to actually complete a project.

Back in the day, most lenses weren’t as sharp as what we have today and the exposures were long enough to show blurring of trees and people. If you want to really capture the look, try shooting at about ½ second or slower. It helps to coach your subjects into the mood by explaining that people back in 1890 were both amazed and suspicious by the new technology of photography. Besides having to sit still, ignoring flea bites, trying not to smile or blink, they were also stifling sneezes and coughs. Once you get your subjects to look uptight and nervous, your vintage photos will really improve!

For real historic photos from 1830-1900, visit one of my favorite sites: http://memory.loc.gov/ammem/index.html

I hope you found this lesson entertaining and useful. I’m sure your great great grandchildren will appreciate knowing that their ancestors road with Jesse James… and they’ll have the photos to prove it!

Jeffery Jay Luhn
Thanks to Photoflex